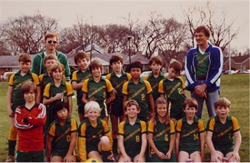 In 1980, Stan Callahan and Robin Webb coached a talented group of 9-year old boys and one girl in the recreational league at Indian Boundary YMCA. The coaches decided to challenge the young players by entering a team in a traveling soccer league against teams from neighboring communities. The Downers Grove Roadrunners Soccer Club was founded the next year by these individuals.

Stan Callahan named the team the "Roadrunners" based on his fascination, while living in Texas, with the speed and grace of the bird and his enjoyment of the "Roadrunner" cartoon. Tim O'Brien, a Downers Grove businessman, donated three sets of uniforms and a game ball for the team which started at the U10 level. Since Mr. O'Brien was a Notre Dame alum and avid Irish supporter, the first Roadrunner uniform colors were green and gold. A picture of the first team is shown right with Coach Callahan wearing the sun glasses.

The first Roadrunners' team worked with the Park District to mow a field on the North side of Downers Grove for use as a game field. That first field was rather hilly in that one visiting team refused to play at the site. Also, several of the competitors frowned upon a girl, Abby, playing for the Roadrunners.

Despite those initial struggles, that first Roadrunners team, and the Roadrunners Club itself flourished and grew to its present day size of over 30 teams.

These days, we have a new look and logo.

Our training, coaching and levels of play are of the highest standards and follow training regimens as outlined by National guidelines. We also strive to build players of character that learn life lessons, respect, and commitment. Our training is not only limited to on field success but also to help mold better people and citizens of the community.

Roadrunners has teams from almost every age group playing in the highest levels of NISL, IWSL, or Premiership. We had players who were recognized for NISL ID programs, Olympic Development progams and who earned Division 1 College Scholarships. We also began our CAP Program (College Assistance Program) to begin matching players with Colleges.