Fall Team Tryouts start in May!

Registration is open for 2020/21 Tryouts for NEW players.

NEW PLAYERS should sign up using the link above.

OUTDOOR TRYOUT SCHEDULE IS BELOW.

If parks are not open by June 8, tryout could be virtual.

VIRTUAL TRYOUT PREVIEW LINKS ARE BELOW

What Does Player First Status mean to your player?

Only 3 clubs in Illinois received this honor. Click for more info

PlayerFirst clubs are part of a heralded group that have proven their commitment to the Players First philosophy and its five pillars: Club Development, Coaching Development, Player Development, Parent Engagement & Education and Player Health & Safety. PlayersFirst is a branded, holistic club soccer experience for parents and players, which emphasizes the development of each individual to his or her full potential, and helps parents make better choices about where their children should play. This is youth soccer's "Good Housekeeping Seal" and all stand out locally and nationally as improving the club soccer experience. 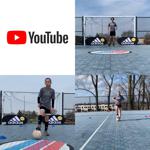 Workouts with a Pro offered to Roadrunner Players

See what Roadrunners is doing during Lockdowns:

Our Philosophy and Results

Our training, coaching and levels of play are of the highest standards and follow training regimens as outlined by the United States Soccer Federation’s National Curriculum.

True player development occurs when each player’s daily training and playing environment is of the highest quality. If this environment is consistent, with a clear vision of what lies ahead for the players, development is maximized.

We strive to turn technical, tactical, psychological and physiological (the four components of soccer) know-how into reality. The ultimate goal is to prepare the players to participate at the next level. The next level could be the next age group or a different level of competition. We also strive to build players of character that learn life lessons, respect, and commitment. Our training is not only limited to on field success but also to help mold better people and citizens of the community, with programs like “Player of the Month” we recognize players for anything from grades to community service.

The Results of our Hard Work:

Roadrunners has teams from almost every age group playing in the highest levels of NISL, IWSL, or Premiership. We had players who were recognized for NISL ID programs, Olympic Development progams and who earned Division 1 College Scholarships. We also began our CAP Program (College Assistance Program) to begin matching players with Colleges.

Success is no accident. It is hard work, perseverance, learning, studying, sacrifice and most of all, love of what you are doing or learning to do.

THANK YOU
TO OUR
SPONSORS! Roadrunners SC is a Nonprofit Organization and qualify for tax exemption under section 501(c)(3) of the Internal Revenue Code.