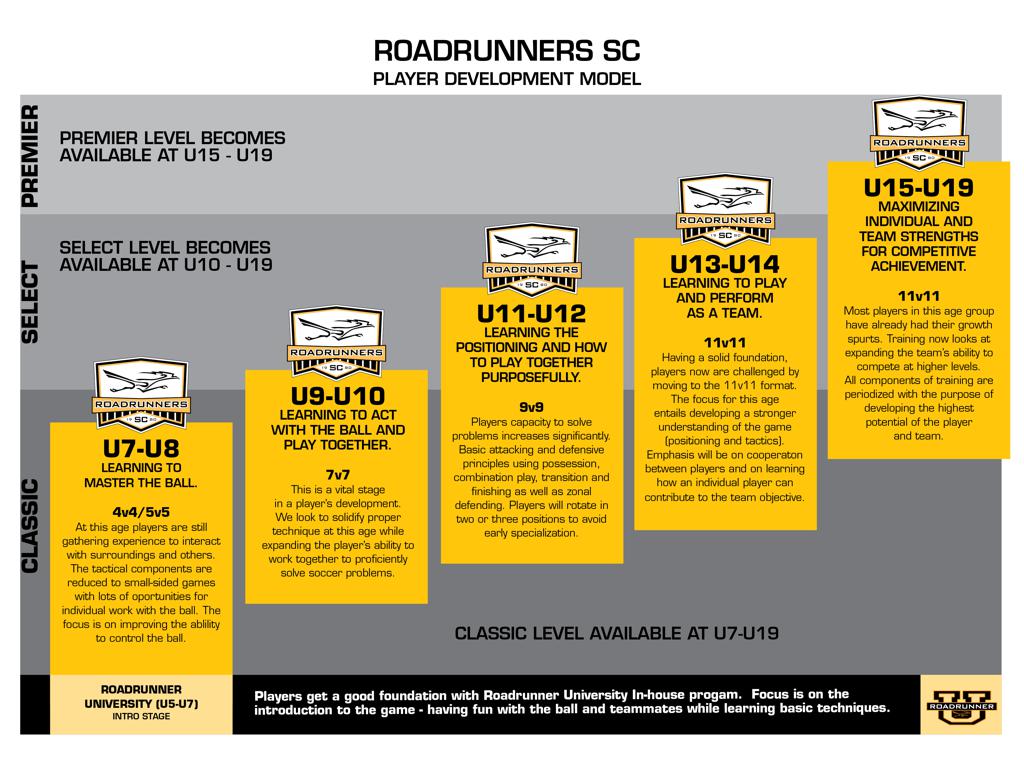 We realize that our children are different sizes, maturity, and athletic ability and that these things change over time. Roadrunners works hard to place all interested players, at levels of competition where the child can develop, have fun, be given leadership opportunities, and achieve success. Therefore, in each age group there may be as many as three or five different teams, each playing at a different level of competition in our soccer leagues. Over time, players may move across these different levels depending upon their development and effort put into soccer.

Following our annual player evaluation process, players are selected for teams that are established for the soccer season, to include Fall, Winter Indoor and Spring seasons. Any exception to this would be based on individual player and team needs.

Roadrunner University Provides 3 game days a week (fall and spring) (1 in indoor) and 2 game days indoors. RRU is a way to start players out early in learning the basic foot skills/soccer knowledge along with getting players used to being part of a proper training session. Since we began, the fruits of our efforts have paid off tenfold. There are MANY players that began playing in our developmental program that are visibly further ahead than most of the players coming directly from rec. soccer.

Classic
Provides 2 trainings per week; league play, two tournaments throughout the year; winter soccer/futsal training; winter league play; choice of playing seasons for U7-U8; U9-U19 must participate in fall & spring seasons. Goalkeeper trainings 1x per week.  This program is offered to all ages.  Offered at U7-U19. (2016-2004) Perfect for young or new players to gain club experience or for older players to gain club experience or allows players to do other sports.

Select
Provides 3 trainings per week; league play, four tournaments/showcases throughout the year for non-HS teams and two tournaments/showcases throughout the year for HS teams; winter soccer/futsal training; non-HS players must participate in all three seasons; HS players must participate in fall & winter (girls) or winter & spring (boys) seasons. Goalkeeper trainings 2x per week. Offered to those who have a larger appetite for soccer at U10-U19 Boys and Girls. (2014 –2004)

HS Alternative Program
This program gives an alternative option to playing for your High School program (Boys=Fall & Girls=Spring)
Provides 4 trainings per week: league play and one tournament; Goalkeeper trainings 2x per week. Offered to those who have an interest in playing soccer beyond HS and choose soccer above all other sports at U15 – U19 boys and girls (2008 –2004)

Adult players
Designed for those players that currently play in college &/or are looking to train & play at a higher level. Offered at U19 – U23 men and women. Summer season only. Click to go to U23 season info.

Roadrunners SC is a Nonprofit Organization and qualify for tax exemption under section 501(c)(3) of the Internal Revenue Code.